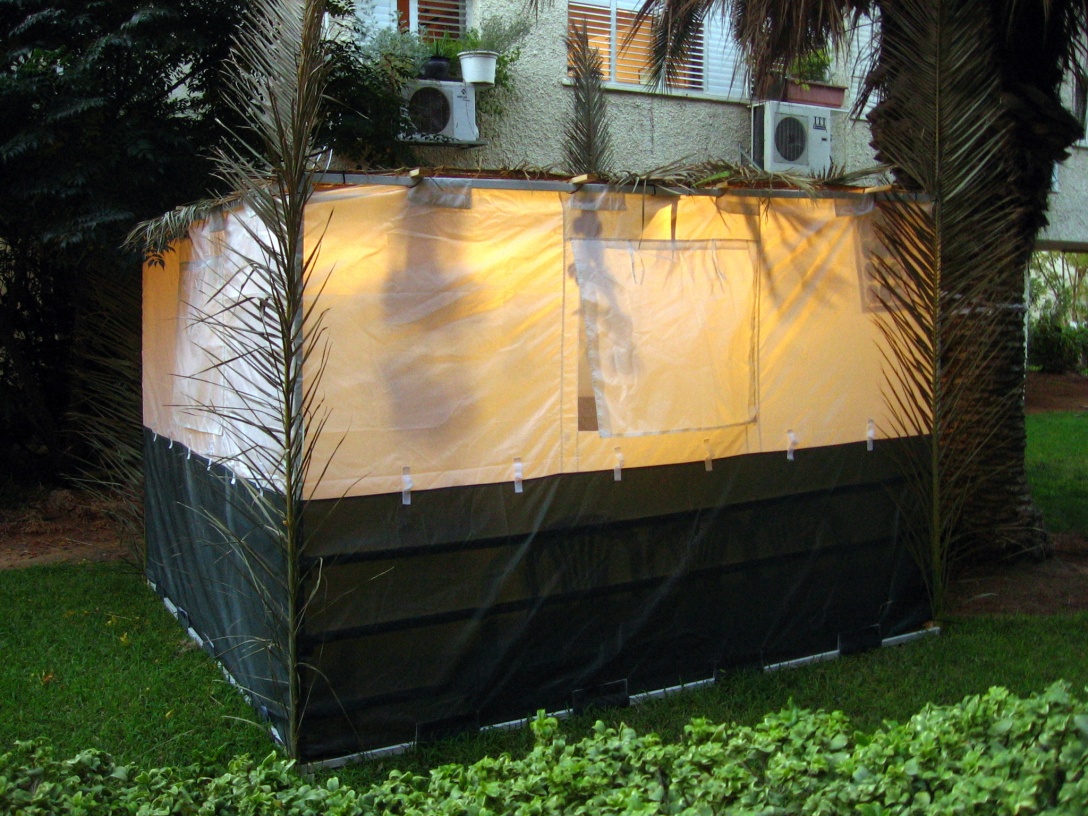 The Jewish autumn festival of Sukkot, known by some Christians as the Festival of Booths, is upon us. It begins at sunset tomorrow night, and preparations are already underway among those of us who live our lives according to our people’s ancient traditions.

Our preparations primarily include constructing outdoor booths (Hebrew: sukkah – singular, sukkot – plural), which we eat all of our meals in, and which many Jews sleep in for the duration of this seven-day festival. Essentially, sukkot are intended as temporary (and: deliberately fragile) homes.

These booths pop up everywhere throughout Israel during the Sukkot season, especially in neighborhoods and cities with large religious [Jewish] populations. As you can well imagine, this includes Jerusalem, which is where I live with my wife and daughter.

Personally, Sukkot is one of my favorite holidays. The change of setting is fun – eating in (and possibly even sleeping in) our booths gives the festival a camping feel, and the seasonal weather in Israel is perfect for this (cuz this is where Judaism was born). Also, it feels cozy and intimate to share meals in our cramped, little booths.

If you’ve been following my blogging for a time, you already know that I am barely holding on to [any form of] faith by the thinnest of threads; and you are also aware that sometimes I cheat and break Jewish religious laws when I am alone.

Notably, Jewish religious law (halakhah) draws a distinction between the severity of infringements that occur in private and those that occur in public. As you may be guessing right now, publicly breaking our sacred religious precepts is considered the more serious transgression.

Skeptic that I am, I harbor no concern of [Divine] punishment for my transgressions, but I do hold my people’s traditions in very high esteem. This is largely because I am of the opinion that we would cease to exist as a distinct group without these time-honored links to our collective history. Therefore, I limit my irreverent infractions to the private sphere.

I’ve come to the conclusion that no matter how I approach my faith tradition, my choices will be laced with hypocrisy; and, so, my most salient question has become which form of hypocrisy I can best live with.

The reason I mention this in the context of Sukkot is that one of the primary religious traditions (i.e., building a booth) associated with this autumn festival is simultaneously very public (outside, rather than inside) and personal (rather than communal). I’m not usually much for such home construction projects; but it would never occur to me to not erect our sukkah.

However, far, far, far, far beyond the public aspect of not having a constructed sukkah of my own, I would never abandon the building of our family’s festival booth because (hey! that’s double alliteration!) of my sense of responsibility towards our 6½-year-old daughter.

You see, not only do I want her to experience Jewish holidays as fully as possible, but I want her to have every opportunity to live an empowered, meaningful Jewish life, grounded in our religious traditions… Yes, I am forthcoming enough to speak [with her] openly about my personal skepticism, but I’ve no reason to hit her over the head with my crushing cynicism towards institutionalized faith.

My daughter has morning prayers every day at school, and she needs to have her siddur with her (it lives on a shelf in her classroom). Unlike her other school supplies, which we purchased in advance of the school year, her little children’s siddur was already waiting for her at home, for I’d intentionally gifted it to her a couples of years ago (before COVID-19 broke out)… back when I attending synagogue services on a regular basis and encouraging her to participate in the children’s prayer group that followed.

While she hadn’t taken much of an interest her siddur until the start of this school year, she’s all about it now. In fact, unexpectedly for me, she made this request just last week: “Abba’chka, I want to say prayers in the evening at home, but I don’t have a siddur here. Could you get me another one?”

“Of course. We’ll go get one as soon possible; I promise.”

And, so, as a parent of my word, I took her to the bookstore today to get a second siddur (also, I bought myself a copy of Maus, which I highly recommend). Also, I began a conversation with her about which prayers are traditionally recited in the evening, and which are intended for the morning (luckily for this little girl, her father knows a bit about their heritage).

By the way, those of you who don’t speak Russian wouldn’t know that our last name, literally translated into English, means: “He who prays to God.” So, who knows? Maybe our daughter will be the first ‘Bogomolny’ in generations who does so.

Perhaps I’m no [true] believer, but I’ll do my darnedest to support her along her path.

44 thoughts on “The Festival of Booths”